Ms. Sara Nathan is an Austrailian Tamil, who had to flee Sri Lanka in a bid to save her life from the state sponsored-communal riots against minority Tamils in 1980s. She is also a human rights campaigner, tirelessly working for Tamil asylum seekers – or ‘boat people’ from Sri Lanka in recent terms- who desperate fled their ever dangerous country.

The decades-longed war in Sri Lanka was ended last year but in a way of massacre killing said-to-be tens of thousands civilians let alone those LTTE cadres including the surrendered.  May the civilized world bring one day these ‘possible’ war criminals in Colombo to the International tribunal, as they have been doing doing now in Cambodia…?

This is Sara’s statement regarding Tamil asylum seekers with critical comments on the opportunistic political areana in particularly Australia, but of course whole international community, commencing ‘herstory’.

Sara Nathan recalls the horror she felt as a teenager 27 years ago when she watched Tamils in Colombo being massacred whilst the Police and Army watched on.  In this event alone, 3000 Tamils were killed and over 100,000 displaced and is \remembered by displaced Tamils all over the world as Black July. It was the last straw for Sara’s family and they left Sri Lanka in 1985. Tens of thousands of Tamils have been massacred by various Sri Lankan governments since Sri Lanka gained independence from the British in 1948.

Ms Nathan noted that the international community had welcomed the formation of the UN Advisory Panel, created by the UN Secretary General Ban Ki-Moon to advise on the accountability related to the violation of the international human-rights and humanitarian laws during the war between the government forces and the Tamil Tigers in Sri Lanka. However, she felt political opportunism in Australia has failed to restore morality to the “boat people” debate and also failed to focus on the root cause of boat people. She asks, “Why has the Australian Government not condemned Sri Lanka for disrupting Ban Ki-Moon’s representatives from doing their work when the UN office was attacked and police sent in to protect the UN officials were called off by the President’s own brother! If UN officials are unsafe in Sri Lanka, what hope is there for Tamils who are all branded as “Tigers” or “Tiger sympathizers”. “

In numerous discussions with the Australian Government, Ms Nathan and other well known long-term Tamil rights campaigners repeatedly warned that Tamils would leave Sri Lanka in droves if the war was not stopped. Ms Nathan said that it was important that aid to Sri Lanka had to be conditional and transparent and that the Foreign Minister, Stephen Smith should not have just visited  Sri Lanka’s capital cityColombo, to discuss border protection and not visit the internment camps or raise human rights issues with the Rajapakse regime. Ms Nathan noted that if Stephen Smith had gone to the camps in the presence of the media with independent Tamil translators, spoken to non-governmental representatives about the rape, torture and resettlement issues faced by Tamils, he would know exactly why Tamils are fleeing Sri Lanka on boats for Australia. 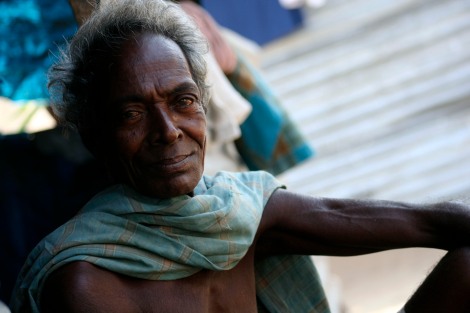 A Tamil man in one of a few IDPs camp in Batticaloa, the eastern province of Sri Lanka. Hundreds of IDPs in this camp fled from Mutur, Sampur or elsewhere in Trincomalee (upper east) in 2006 as the government forces launched offensive against Tamil Tigers. Even if a full scale of fighting in eastern province was over in the mid of 2007, the IDPs still have no clue when they could return home as of visiting time in the mid of 2009. (Photo @ Yu K. Lee)

A Tamil woman nurses her one year old baby, who was born in one of a few IDPs camp in Batticaloa, the eastern province of Sri Lanka. Hundreds of IDPs in this camp fled from Mutur, Sampur or elsewhere in Trincomalee (upper east) in 2006 as the government forces launched offensive against Tamil Tigers. Even if a full scale of fighting in eastern province was over in the mid of 2007, the IDPs still have no clue when they could return home as of visiting time in the mid of 2009. Sri Lankan government has declared Eastern Province ‘liberated from the LTTE’ 2007. The "liberated" east, however, witnessed abductions and violences committed by paramilitary forces and the armed forces. Ramnants of LTTE were also said to be active as of visiting time. (Photo @ Yu K. Lee)

Furthermore, while the current government is only too happy to talk and consult with the Sri Lankan Government, we are extremely disappointed that they are not speaking to Tamil leaders in Sri Lanka. It’s a very off-hand and archaic approach to a tragic humanitarian crisis. Day in and day out, Australian Government officials hear claims from Tamil asylum seekers of rape, torture, murder, harassment, persecution and of cultural and human genocide. The body of emerging evidence is overwhelming and too many unanswered questions remain which has prompted the UN to act. The Sri Lankan Government is not cooperating, acts in a dictatorial and arrogant manner and the Australian Government needs to distance itself from a regime which is under investigation for war crimes.

Ms Nathan advised that the President of the Canadian Tamil Congress Prof. Sri Ranjan said “this perhaps is the first war ever with such an alarming number of incidents of war crimes captured and saved by digital devices, and the civilized world is obliged to take tangible action.” Furthermore, the US Assistant Secretary of State Arthur Dewey who served in Sri Lanka as a member of the International Independent Group of Eminent Persons, observing Sri Lanka’s own investigation on human-right violations noted that “The Sri Lankan government has proven time and again that it’s unwilling to ensure accountability for serious violations.”

If Tamil people feel safe in their traditional homelands, they will not flee Sri Lanka. After all, the very same people who survived the tragic devastation of the Tsunami in 2005 did not flee Sri Lanka for Australia in boats. With the help of the international community and the Tamil Diaspora, they got back on their feet and tried to re-build their lives. Schools, homes and hospitals that were rebuilt in these exact same areas were destroyed by bombs as innocent civilians took shelter in them. It is human rights violations that are forcing people to risk their lives on leaky boats, keeping people smugglers in business and forcing Australia to spend millions of dollars in funding International Organisation of Migration and other organisations in the region.

Ms Nathan said that human rights issues warrant a bi-partisan approach so that they are not hijacked by racist and un-informed elements on talk-back radio. . The Australian Government must support the Tamil people’s right to self-determination and the UN’s war crimes advisory panel so that justice for hundreds of thousands of Tamil victims killed or displaced can ultimately lead to reconciliation and genuine peace in Sri Lanka. Ms Nathan said a global Boycott Sri Lanka movement was well underway. We are utterly disappointed with the attitude of Labor and the Liberals and so we are appealing directly to the Australian people who we know are fair and just. Australians supported Bob Hawke when he led the over-throw of the South African Apartheid regime and the release of Nelson Mandela who was imprisoned for over two decades because he was accused of being a “terrorist”. In the same way, Australians can stop the boats coming here by boycotting Sri Lanka. Do not drink Ceylon tea, do not travel to Sri Lanka, do not buy Sri Lankan garments made by GAP, Victoria’s Secret or Diesel and do not watch the Sri Lanka cricket team when they tour Australia in November this year.