Yesterday, I’ve come across a story about 16 year old student in Chiang Rai,  Northern Thailand, where the teenager and four other students – mostly university students – have publicly carried out  banners, among which was “I saw the dead at Rachaprasong” (‘Rachaprasong’ used to be a main protest site of Thai Red Shirts-ed) on July 16. They were reportedly organized the gathering on July 16 through Facebook, the social network which is watched by a ‘vigilant’ authority in Thailand. 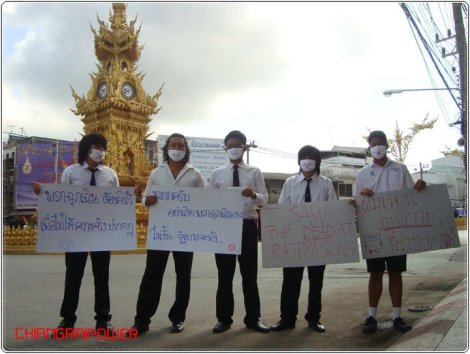 Their activity seemed to rub the ‘all (or ill) powerful’ authority, which could not spare even the minor. The 16 year old boy, the student of DramRongRatchaSongKro Chiang Rai – secondary school – and his family have been under enormous pressure, as they were called and interrogated by police in repeat.

According to sources, students who participated this humble gathering reported themselves to Center for the Resolution of the Emergency Situation (or CRES) on July 18. They will have to turn in again to CRES on July 30. However, the 16 year old boy was interrogated by uninvited police at his home next day. Police took his notebook and some documents at the time.

This absurdity is, obviously a creation powered by Emergency Decree. Three of those participants were reportedly issued arrest warrants for violation the Decree. The violation against rights to write such as ‘I saw the dead at Rachaprasong…’ and hold the banner in five persons together is one of the sequent episodes in the country. On July 18 one NGO activist named Nathee Sornwaree at Rachaprasong was taken by undercover police as he was shouting something similar to “I saw people shot at..” Thailand, where the Decree has been applied to each and every critical piece, has become a subject of  ‘serious gossip’ among rights groups and journalists.

Despite strong recommendations from various parties, including the government appointed-National Reform Committee led by the former PM Anand Panyarachun, there’s little sign that the decree will be lifted sooner than later. There’s a word of ‘gradually’ (lift of the decree) spelled by Prime Minister according to AFP (http://www.google.com/hostednews/afp/article/ALeqM5iylC73MOWOw7kZuNfTFRTg71bt8A), while scrutiny as well as censorship on ‘off and online’ have been persistent.

Please read more regarding the issue above mentioned, reported by Matichon in Thai at

and in english at http://asiancorrespondent.com/bangkok-pundit-blog/what-happens-when-you-say-you-saw-dead-people

which is the only english article as of early morning of July 25. Neither the self-claimed ‘the world’s window to Thailand’ Bangkok Post, nor ‘independent’ or ‘insightful’ The Nation has not reported it ‘yet’.

Update of the issue of 16 year old boy might be following coming days.