“Mum’s dead”. The gloomy faced Sujendran Gunesekaram greeted me, as we met in person for the first time. His mother died of a heart attack on September 5, after suffering for three years.

Sujendran is a 27-year-old Sri Lankan Tamil originally from Muttur in Trincomalee, the war-hit town in the east. He was one of 254 asylum seekers on the Australia-bound boat Jeya Lestari that moored off at the port in Merak, Indonesia in October 2009.

Sujendran wanted to reach Australia at any cost. But he returned to Sri Lanka in November last year solely because of his ailing mother. “I would have not returned at all, unless my mother was not greatly ill”, he said.

However, on arrival Sujendran couldn’t go straight to his mother. He didn’t expect what would happen next.

Taken to the ‘4th floor’

It was about 1 am on November 26, 2009. Sujendran’s passport was being checked at Bandanaraike International airport near Negombo, 37km north of Colombo.

They took Sujendran to a room. They told him “you are LTTE [Liberation Tigers of Tamil Eelam — ‘Tamil Tigers’]”, which he denied. After the CID men left the room, a Tamil-speaking man with a “Batticaloa accent” — an eastern Tamil accent — entered the room via another door. The man started to beat up Sujendran.

Sujendran said he is sure the man was from “Karuna’s party”.

Vinayagamoorthy Muralitharan, or Karuna, is now a deputy minister of resettlement in Sri Lanka’s government. He was once an eastern commander of the Liberation Tigers of Tami Eelam (LTTE), but defected to the government side in 2004.

Ever since, he has run a militia group in a form of political party.

His group – initially TMVP, not split – has been accused of involvement in recruiting children, raping women and abducting Tamils and dissidents and harassing Muslims in the east. According to a 2009 United Nations High Commissioner for Refugees (UNHCR) report, it stated

“… It is also reported that TMVP forces are responsible for extrajudicial killings, deaths in custody and abductions, which have apparently been carried out with the knowledge and tacit agreement of government actors and local authorities…”

The Batticaloa man shouted at Sujendran as he assaulted him.

“Your bag is from International Organisation of Migration [IOM], which supplied arms and ammunition to the LTTE, right?! You yourself have been involved in it, haven’t you?!”

Sujendran explained: “I was traveling with the IOM bag, because IOM has facilitated my return from Indonesia.”

After he was beaten for several minutes, Sujendran was put into a green jeep, where he was blindfolded. “I thought I was going to be murdered”, he said. “But I found myself at the 4th floor.”

The “4th floor” is the satirical word used for the CID’s torture and interrogation unit. There, Sujendran saw dozens of “LTTE suspects”. After a week, Sujendran was transferred to the Boosa Camp, where he said he was tortured.

Hung upside down, he said he was heavily beaten with bicycle parts and pipes. His left eye is “still painful” from the beating, he said. But he has refused to go to the government hospital for treatment.

“I don’t want to tell the government doctor what happened to me”, he said, “because the doctor would report my case to the government, who will catch me again.” As he cannot afford to visit a private hospital, he has endured the pain in his eye for almost a year.

Sujendran was released in January 2010 along with 30 other prisoners. But at least two of those released disappeared soon afterwards.

Sujendran said he had started to feel threatened again since early July, when a CID vehicle came to his workplace in Colombo. They called out for him to “come”.

“I ran away as I saw a CID jeep in the distance and I changed my mobile Sim card”, he said.

Asylum seekers who were caught up by Malaysian authority as they were about to get on the boat in late 2009. They said they will try it again. (© Lee Yu Kyung 2009)

On October 6, three asylum seekers, including two from the Merak boat, returned to Sri Lanka. They too were “disappeared” at the airport shortly after their arrival but later “appeared” in the “4th floor” said an activist who is close to them.

On November 17, a 37-year-old British Tamil journalist named Karthigesu Thirulogas was arrested at the airport as he flew in to see his ailing mother. As of December 1, no one has heard from him, despite an unconfirmed report that he has appeared at a government function in the east of the country.

“There have been people who were released to be abducted, disappeared or killed”, a Colombo-based activist told me. “If the journalist was released, he would have contacted his family or colleagues with no doubt. But no one has got such contact.”

Another activist in Colombo told me that they also believed the journalist had been disappeared.

“Due process” for returnees

Notwithstanding, the UNHCR issued its latest guideline for Sri Lanka in July. The guideline referred to “the context of the improved human rights and security situation [in Sri Lanka] following the end of the armed conflict”.

However, the UNHCR admitted: “It is important to bear in mind that the situation is still evolving, which has made the drafting of these Guidelines particularly complex”.

Part of this “complexity” seems to be that even in the “improved situation”, the Sri Lankan government continues to persecute deportees and returnees.

Moreover, the UNHCR’s “improved situation” doesn’t address the growing anti-government feeling among Singhalese, who used to support the regime’s war, let alone Tamils. Nor does it account for the fact that the government of Sri Lanka continues to fight the ghosts of the LTTE.

Sujendran said his interrogators mostly asked him questions about the LTTE, including “where are the arms?” and “how much money did you collect for LTTE?”

These questions were put to not only Tamil deportees, but also Sinhalese deportees, such as Sumith Mendis.

An asylum seeker, Sumith was deported by the Australian government from a refugee detention centre on October 4, 2009. Upon his return to Sri Lanka, he was arrested at the airport with his brother. Sumith was released, but was arrested again in August and is still held today.

“The CID inspector assaulted my husband in front of all his family, including our 4-year-old son”, Sumith’s wife told me.

Sumith’s lawyer has asked the judicial medical official from a hospital where Sumith was treated after torture to issue his client’s medical report. He has received nothing.

Another Singhalese deportee accused of being linked to the LTTE is Lasantha Wijeratne. Lasantha was deported from Australia in November, 2009. He has been detained since early this year.

According to Lasantha’s written statement, the CID questioned him at the airport about “his links with the Tamil asylum seekers in the Christmas Island [detention centre]”.

“If somebody puts your name down as LTTE, then it’s very difficult for you to get out”, said one human rights lawyer in Colombo. “The CID does not need evidence”.

In fact, Lasantha’s father-in-law once housed a Tamil man in early 2008 for two months. The Tamil man was suspected LTTE, which the family never though of. Because of the family’s hospitality, Lasantha’s father was taken to the police station and tortured. He died two days after his release.

Reports of arrests of those involved in smuggling networks are rare, but the crackdown on Sri Lankan asylum seekers has intensified. 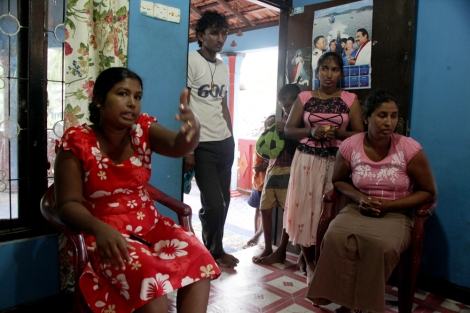 The family of Mr. Sumith Mendis, a Sinhalese deportee from Australia, said Sumith was assaulted by police inspector in front of all family’s eyes. Sumith also claimed he saw an Australian officer from Australia High Commission in Colombo was present as he lay down on the floow (due to torture). “He knew that I was a returnee from Christmas Island. I saw the commissioner donated a small fridge to the Unit. I was tortured while the commissioner was inside the same section.” said Sumith in his petition letter prepared for submission to the Supreme Court. (© Lee Yu Kyung 2010)

In April, Australia suspended all applications for asylum from people from Sri Lanka (for three months) and Afghanistan (for six months).

On October 6, more than 120 Sri Lankan Tamils in Bangkok were rounded up in the Sapan Mai neighborhood. Among those arrested were four pregnant women and 18 children under four years old — including a two-month-old baby. A further 61 Tamils were arrested on October 30 in Songkhla, southern Thailand.

Australian government officials have also been accused of being present when returned Sri Lankan asylum seekers have been tortured.

In the petition Sumith has prepared to submit to the Supreme Court on September 9, he said that he saw a representative from the Australian High Commission was present as he was tortured on the “4th floor” of the CID.

Sumith’s petition said: “A commissioner with Asian appearance visited the newly created marine unit (of CID) while we were tortured in the same area. The commissioner saw I lay down on the floor (due to torture). He knew that I was a returnee from Christmas Island. I saw the commissioner donated a small fridge to the Unit. I was tortured while the commissioner was inside the same section.”

His lawyer is waiting for the medical report from a judiciary medical official before the petition is submitted to the Supreme Court.

I requested an interview with the Australian High Commission in Colombo in late September. The Commission replied that it did not give interviews to the media and referred me to the foreign affairs department in Canberra. At the time of publication, the department had not replied to Green Left Weekly’s’s request for comment on Sumith’s petition.

Sri Lankans have sought asylum in countries such as Australia for many reasons. Some have fled in fear for their lives, while others could be classed as “economic migrants”, encouraged by Sri Lanka’s war-driven economy to seek a better life elsewhere.

But the practice of deporting asylum seekers back to Sri Lanka is placing them in imminent danger. The persecution the Sri Lankan government metes out to returnees will ultimately create more refugees, some of whom perhaps first left Sri Lanka as economic migrants.

Published by <Green Left Weekly> at