Not long ago South Korea was the freest country in Asia in terms of freedom of expression. It was a great achievment of the bloody struggle for democracy for decades. However, democratic values seem to be respected no longer. The situation has been drastically plummeted to the similarity of dictator-rampaged society, since the conservative Lee Myung Bak (or ‘Bulldozer’ as nick-named) regime came to power last December.

The shameless regime has been committing heavy-handed crack downs on the dissident and power abuses, wielding police forces. These measures have eventually led to, for instance, the death of 5 innocent people who were on sit-in protest against forced eviction and one policeman was died in the same incident of  “Horrors in Young-San” on Jan. 20th. Those ‘die hard’ right wing or conservative media, notably Chosun-ilbo, Dong-A ilbo and Jung-Ang ilbo have orchestrated to all kinds of suppressions as usual. (“Ilbo” means “Daily newspaper” in Korean language)

In a meantime, distinctively from a few ill-informed international media, which interpreted ‘legitimate’ people’s struggle in Korea into ‘something like a defy elected-government, i.e. ‘undemocratic’ ‘ (as we’ve seen the PAD’s reactionary movement in Thailand),  the following report from Aljazeera reflects bits of what’s happening in Korea for the past one year, which was proved to be ‘good enough’ to set back times decade(s).

The report is about the case of “Minerva”, in which one famous bloger namely ‘Minerva’ was arrested for his acute soothsaying on financial crisis. It’s not a joke, unfortunately! The government has blamed him for posting ‘false speculation’ on website, to cover up its failure on economic policy.

Reporters Without Border also issued a statement on it http://www.rsf.org/article.php3?id_article=29954

If you seek genuine voices of the socio-political developments in Korea, http://indymedia.cast.or.kr/drupal/ and http://english.hani.co.kr/kisa/section-014000000/home01.html are recommendable. And keep visiting to this blog as well.

“He was called ‘the president’ on the internet,” he recalls.

A left-wing academic who has long railed at South Korean governments of all stripes, Chin relishes the success, however fleeting, of another anti-establishment figure.

The ‘presidency’ of Park Dae-sung was indeed something to behold

An unemployed, self-taught financial soothsayer, armed with little more than an internet account and a pile of text books, had, as the credit crunch took hold last year, risen to extraordinary prominence in this internet-obsessed country.

Writing as Minerva (he named his online alter-ego for the Roman goddess of wisdom), Park accurately predicted the fall of the US investment bank Lehmann Brothers, and collapse in the value of the South Korean currency, the won.

Woven into the economics was a caustic dose of politics – scathing criticism of President Lee Myun-bak and his administration’s handling of the crisis.

Then in late December, as far as the authorities were concerned, he overstepped the mark. 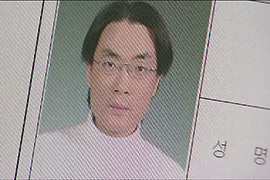 'Minerva' has been indicted on charges of spreading false information

Minerva wrote that the government had instructed banks not to buy US dollars in an effort to shore up the won.

Prosecutors say this was false, and cost the country $2bn as it tried to stabilise a currency market Minerva had sent into spasms.

He was arrested on January 7, and charged under a little-used communications law.

His lawyer, a former National Assembly member Park Chan-jong, transmits utter confidence that no court will convict him.

“In general people don’t think that this is a crime,” he says. “The government is stretching the laws to prosecute Minerva.”

Eventual conviction or no, the simple fact of Minerva’s arrest is having an effect.

His fan, Professor Chin, says a chill wind of fear is blowing through South Korea’s enviable broadband network, and once outspoken bloggers are now censoring themselves.

“In this age,” he says, “you can’t know if you’ve committed a crime until the prosecutors or police call you up and tell you.”

Industry insiders say they see a trend. One from a leading internet portal says since the arrest political posts are declining in number, while those on subjects such as entertainment news are on the climb.

And some South Korean ‘netizens’ are even backdating their fears – removing posts they think might attract unwanted attention.

“After Minerva’s arrest I realised there was a possibility that the government could track me down and prosecute me,” says Peter (not his real name).

“I wrote those posts not for any gain, politically or economically. I just wrote them to express my opinion.”

Such fears may well be overblown, but they are genuine.

Peter says internet forums are buzzing with advice from poster to poster, often suggesting that passages be removed for the author’s safety.

A succession of government departments declined to comment to us on the issue. But a recent statement from the chief prosecutor’s office, detailing its actions in the Minerva case, acknowledged the row stirred up by the arrest.

It said in the future prosecutors would continue to defend the right to free speech, and leave well alone in cases where bloggers were writing opinion and analysis, be the facts right or wrong.

But it went on: “Those who spread falsehood with the intent of hurting public interest will be strictly dealt with.”

The Minerva case could be a one-off. An embarrassing story for an administration made over-sensitive by a stalling economy and still bearing the scars of three months of internet-enabled anti-government street protests last year.

Nevertheless the impression at least, that there is a crackdown underway on South Korea’s virtual world, remains all too real.