Cambodia’s garment industry has exploded and has been exploited for many years. The industry claims more than 80 percent of the country’s exports, earning $5 billion a year. Hence it’s conveniently a pillar of the economy of the impoverished Southeast Asian nation. It is these workers in Cambodia’s garment sector and also other labors in developing nations who have been stitching H&M, GAP, NIKE, ADIDAS, PUMA and ‘you name it’ brand, which many of us are probably fond of.

To dress populations in developed world, the workers in Cambodia- mostly female aged from late teen to mid of 20s– are employed by numerous factories run by companies from mainly ‘richer’ Asian nations such as Japan, South Korea, Singapore, Taiwan and even China which have ‘invested’ in Cambodia. While consumers, buyers and ‘investors’ are beneficiary from this lucrative business, the benefit of the sector, however, has zero-reached to workers, who as one labor activist put it “eat less work more”. That saying has given a bleak answer as to why often faint of workers or even ‘mass faint’ in a few occasions have occurred.

The poor condition isn’t limited to working place but living place too. Most of garment workers share one room, sized around 7-10sqm, with 3-5 persons to reduce each one’s expense, otherwise $25 to $45 rent per month. They have little choice but to do overtime work for excessive hours, from which they could earn 50 cents extra income per hour according to employees of one of the six Korean companies in Canadia Industrial Park outskirt of Phnom Penh. Many of them are migrants from provinces, which fact has indicated that they would send certain amount of money to their family back home.

Since December 24 2013, garment workers in Phnom Penh have gone on strike to demand higher wage of $160, which is a double of the current minimum wage $80. Yet, “it’s not doubling a wage but more like correcting it” said David Welch, country director for the US-based labor NGO Solidarity Center. Nevertheless, the strike was met by brutal crackdown on January 2nd and 3rd by elite paratrooper 911 forces and military police respectively. Deaths tolls are varied between 4 and 6. Dozens were injured and 23 have been apprehended, while 3 are still missing as about two weeks have passed ever since the crackdown took place. Two of 23 who were apprehended were released on bail on February 7th.

Disturbing factor was soon to be emerged. There has been controversy about the role for crackdown played by South Korean embassy and Yakjin Trading Co., the joint Korean and American corporation, which has ‘allegedly’ enjoyed close relationship with 911 Unit. South Korean embassy has issued rather bizarre but proud-toned statement on its Facebook on January 5th saying that :

“Military forces are directly guarding only Korean companies among many factories in the Canadia complex”.

It also has stated that :

“The embassy visited the city’s defense command headquarters with Korean business men to tell about the situation.”

After outcry from various parties were poured to question about the embassy’s role “to what extent”, the statement was taken down on January 8.

According to Mr. Sam Rainsy, the leader of the opposition party Cambodian National Rescue Party, commanders of 911 unit are shareholder of Yakjin Co., which Yakjin has strongly denied. The former soldier who served 911 unit for more than three years, whom I interviewed together with the ‘Independent Investigation team’ composed of South Korea’s union and civil society, said :

“Some soldiers from the unit were ‘assigned’ by their high ranking commanders to be security guard for Yakjin earning another wage from the company, apart from the one paid by the government”.

So what happened was as he continued,

As a Korean born, I’ve got clear understanding on Korea’s 60s and 70s, during which Korean garment workers had had to live on what Cambodian workers have to bear today. It is since around 1990s when South Korean ‘investors’ have been seeking ‘the cheaper the better’ labor abroad mainly in China and nowadays in Southeast Asia, including Cambodia. Cambodia’s today is ‘our past’. It is our past, when poverty-prevailed and exploitation in garment industry were rampant. And it is our shame that Korea has ‘learnt from the past’ and applied to others.

“Dictatorship, No thank you. Democracy, yes please” Opposition supporters in Cambodia are chanting anti-government slogans in front of the Phnom Penh Court on January 14, as the country’s opposition leader Sam Rainsy would appear for court hearing. Sam Rainsy, along with his deputy and one unionist, is accused of “inciting civil unrest” during the recent workers’ strike. The strike was violently crack downed by elite paratrooper 911 forces and military police. (Photo © Lee Yu Kyung)

After having been questioned for hours, Cambodia’s opposition leader Sam Rainsy appears before crowd on January 14. He, along with his deputy and one unionist, is accused of “inciting civil unrest” during the recent workers’ strike, which was violently crack downed by elite paratrooper 911 forces and military police. (Photo © Lee Yu Kyung)

Hundreds of people gather in front of the Phnom Penh court, where the country’s opposition leader Sam Rainsy would be questioned by the Court for alleged role of inciting civil unrest in recent weeks. Among crowd were a number of workers and unionists as well as disgruntled grass roots. (Photo © Lee Yu Kyung) 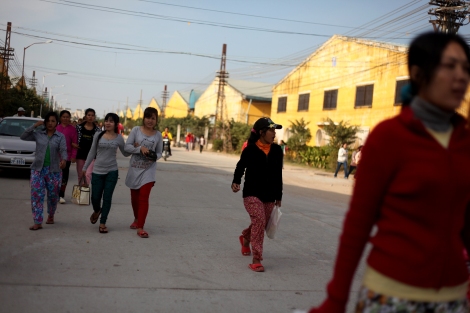 Garment workers in Canadia Industrial Park in Phnom Penh are coming out after work around 4pm. Many more workers are still working inside for overtime for which they would get paid 50 cent per hour. The Canadia Industrial Park was the main clashing points on January 3rd, along with the vicinity of Yanjin Trading Co., which is 10 km away from the Park, where paratrooper’s crackdown on workers took place on January 2nd. (Photo © Lee Yu Kyung)

Garment workers in Canadia Industrial Park in Phnom Penh are subject to body-check as they’re coming out from the factory after work. The Park was the main clashing points along with the vicinity of Yanjin Trading Co., which is 10 km away from the Park, in recent crackdown which has taken place on January 2nd and 3rd. (Photo © Lee Yu Kyung) 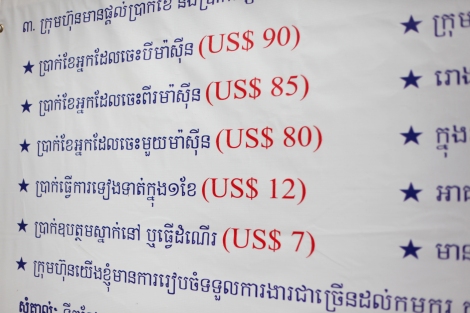 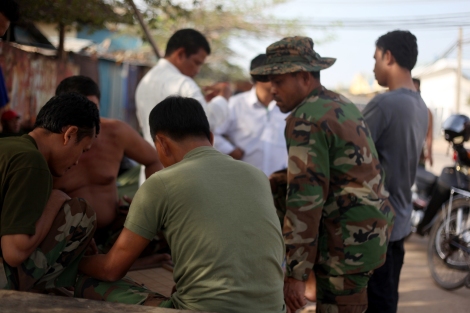 After the violent crackdown on striking workers by military police as well as ‘911 special forces’ whose base is stationed next to Yakjin Trading Co., Royal Cambodian Armed Forces (or RCAF) Brigade 70 have been deployed in charge of protecting Canadia Industrial Park in Phnom Penh. Both the elite 911 unit and Brigade 70 forces, being trained for anti-terrorism, are infamous with their human rights violation. (Photo © Lee Yu Kyung)

Garment workers in Canadia Industrial Park in Phnom Penh walk home after work. The factory of Adidas, which one of the two workers in the picture is wearing, has been also operating in the park. Among others are GAP, NIKE and H&M. (Photo © Lee Yu Kyung)

Pi Rom (24, left), a garment worker was shot in his right leg on January 3rd when security forces shot at garment workers demanding wage raise from $80 to $160 per month. Pi Rom has claimed that it was sniper(s) who had started to shot at workers. And military police shooting was followed. Pi Rom used to work for Korean company in Canadia Industrial Park in Phnom Penh. (Photo © Lee Yu Kyung) 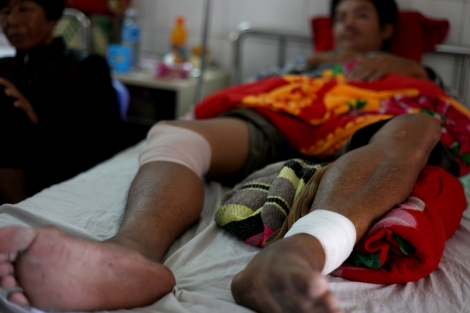 Srey Thorn (24) was driving Tuk Tuk on January 3rd when he got shot with 3 bullets near Canadia Industrial Park on Veng Sreng road. On that day tens of thousands garment workers were demand wage raise from 80 USD to 160 USD per month. According to workers who participated in the strike, most of workers from the Industrial Park had participated as they were outraged by the violent crackdown on previous day. (Photo © Lee Yu Kyung) 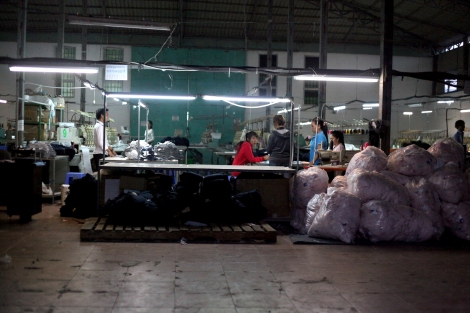 A Chinese-run factory near Canadia Industrial Park, which is located in south-west in Phnom Penh. The recent violent crackdown on garment workers in the city has raised serious questions of ethical investment valuing human rights in developing countries, such as Cambodia. (Photo © Lee Yu Kyung)

Sok Khoan (37) is working for a Chinese garment factory. Her wage is $130 as she is ‘special skilled’ worker. Yet her total income is less than $150, which amount is not that higher than others workers whose wage is $ 85 plus bonus. Garment workers for various factories received the minimum wage plus bonus to make about 100-150 USD in total. (Photo © Lee Yu Kyung) 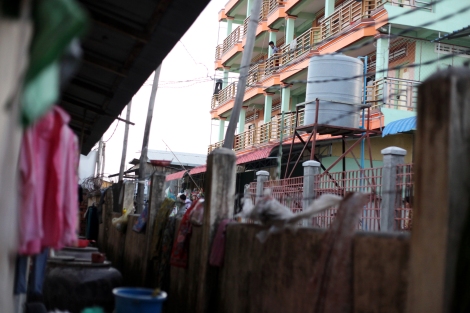 It’s common that garment workers rent one place to share 4-5 persons. Their rents are varied from 25 USD (left in the pic) to 45 USD (right in the pic) on average. (Photo © Lee Yu Kyung) 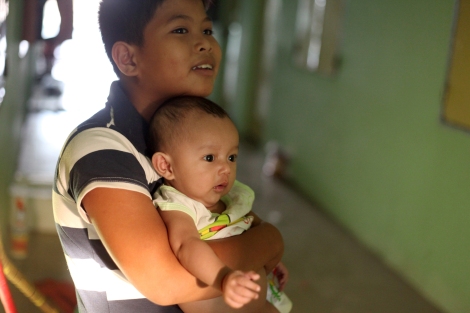 The 13 year old boy cares of his younger baby as their mother is working till late night nearby garment factory. (Photo © Lee Yu Kyung)

** The essay has appeared here at Mygreennews.com