Giggling or punky-styled youths are walking side by side with traffic jammed street in Bangkok. The Shoppers packed streets seem to match the broad sign of ‘Amazing Thailand Grand sale 2010’. ‘Amazing Thailand’ has returned to normal, at least in a street of Bangkok, thanks to the extended emergency decree which aims to prevent street protest.

There have been tireless efforts to castigate critical voices before and after the bloody crackdown on Red Shirts in May. The Center for the Resolution of Emergency (or CRES), the military-dominated institution dealing with the unrest, has shut down some 2,200 website deemed to be violating the Computor Crime Act since the State of Emergency imposed on April 7 this year, according to the International Crisis Group report on July 5.

In provinces, the authority seems to intensify royalist campaign following the crackdown. Some village heads in the country’s North East (or Isaan) have received two types of papers from the Ministry of Interior via district office. The first one is to collect signatures for what appeared to be royalist ‘oath’.

‘This person wants to show for their willingness to worship the Monarchy…to protect Monarchy to his or her life..,’ reads the oath.

“I was told to collect 300 signatures in my village, but I’m afraid I couldn’t because some villagers are actually reside in other area” said a village head in Kalasin province.

The signature campaign on the loyalty oath for the royal family has seemed to be launched in some village of Issarn. One of the campaigns was to organize a group to "implement" what was written in the paper, fearing Red Shirts supporets who were accused of being anti-monarchy despite their denial. (Photo by Yu K. Lee)

To more burden him is another paper. It’s about ‘joining the Monarchy protection group’. While the written words are more or less same to the first one, he should ‘organize’ 20 people to ‘implement’ what the paper declares. The idea of organizing a group reminisce some kind of village militia. Villagers, many of whom are Red Shirts supporters, are disturbed, as they have been accused of being anti-monarchy despite their denial.

“We always respect our Monarchy. I don’t know why we should sign to this paper…” said Chuan (55, name changed), a chairperson of Tambon (or sub district) to which the village belongs to.

Despite non-stop murmuring of ‘reconciliation’ by Prime Minister, a part of his ‘roadmap’ has been the other side, to persecute his critics. Besides detaining core leaders and hundreds protesters, more arrest warrants have been issued for 819 Red Shirts according to Matichon newspaper on June 10. 787 out of the total were from provinces.

Luen Sisupho (42), from Sakon Nakorn, is one of those hundreds on the run. He received a summons from police ordering him to turn in by May 25, otherwise arrest warrant would be issued against him. Luen, a local activist of Assembly of the Poor, has never voted for pro-Thaksin party. In fact, he has been distanced himself from Red Shirts until he started to join last March 12 this year.

Luen Sisupho (42), an activist for The Assembly of the Poor, was sommoned by police late May. Since then he's been one of a nearly thousand on the run, who are either summoned or wanted list by authority. Luen has distanced himself from Red Shirts until he started to joined this year (Photo by Yu K. Lee)

“I could no longer disagree with what Red Shirts were demanding. Dissolution of the house and new election are very democratic demands, aren’t they?” he asked.

“Government has lost hearts and minds of people, whereas Red Shirts have won more hearts. There will be more people who join the next protest, I bet” he argued.

Quite likely. There are signs the Red Shirt movement has been swelled by the government’s repression. Akkaradej Khankaew (22) from Kalasin province, who was one of six killed in the last sanctuary Pathuwanaram temple, is said to be the case. He has started to watch ‘P-Channel’, the mouth piece of Red Shirts, after Sonkran violence in 2009, said his aunt, the only family survived by him. 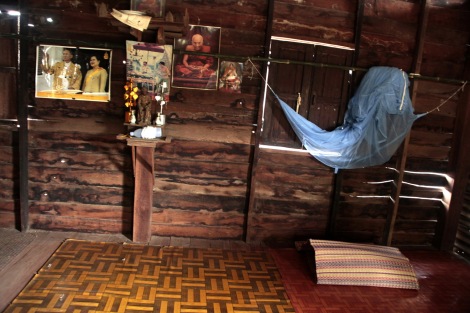 The room of Akkaradej Kahnkaew (22) who shot dead at the last sanctuary temple, Pathumwanaram. The famous picture of King waving his hand along with Queen was featured in the room. (Photo by Yu K. Lee)

“Since the Sonkran incident, my nephew became interested in what’s going on in the country. We’ve joined the Bangkok protest together this year. I came home early April, but my nephew stayed there and finally got killed” said Intaracham Inphum (58) grieving aunt in her newphew’s room, room, which features a picture of the Thai king and queen.

Intaracham Inphum (58), a grieving aunt whose nephew was one of the six killed at the temple Pathumwanaram. She had been in Bangkok protest with his nephew Akkaradej Khankaew, but came back home April 3, while the nephew was in Bangkok till died. (Photo by Yu K. Lee)

The region of Isaan, historically, has been the center of rebellion. It was here guerillas movement by Communist Party of Thailand (or CPT) was launched in 1965 and active till 80s. Nakorn Panom, Mukdahan, Kalasin and Sakorn Nakorn, which guerillas based-Pupan mountain overviews, were particularly strong hold those days. Communist insurgency, which occurred in various parts of the country, is now history. is now history. But the “Red Zones” from the communists struggle appear to have been revived by the Red Shirts movement

“If not communist, you had no friend those days”

Khitisak Posawant (58), once a communist now a Red Shirts in Pakchong village in Mukdahan province has said. He is proud of himself being in Bangkok protest to fight for democracy. Out of some 200 households of his village, nearly half of them have been to Bangkok for a protest.

“My generation is well aware about brutality of Thai armed forces, because of experience of communist era in the region” he added.

Khitisak Posawant (58), once communist now Red Shirts in Mukdahan province said he is proud of himself being in Bangkok protest to fight for democracy.(Photo by Yu K. Lee)

“Just trigger your gun, as soldiers in Bangkok did on May 19 during the crackdown…” said Yon Ngonsuk(57), another Red Shirts supporter from the same village. He wasn’t shy to talk about his past career involved in counter insurgency.

“We didn’t know who was communist or not. But we had to think all were communists in operation. It’s similar to the fact that Abhisit accused Red Shirts as terrorists without clarification” Yon said.

Yon had served for Volunteer Defense Corps (‘Kong Assa Rak Sa Dindaeng’ or ‘Or Saw’ in Thai), the biggest paramilitary forces, for nearly 20 years. However it was not his choice of wearing military uniform. He was arrested by armed forces at his age of 18, while helping communist guerrillas. His life since then shifted to the totally opposite side.
“We all Thai, love each other, not fight…”

The slogan Yon heard from his captors almost four decades ago was the same as that broadcast by army speakers to the Red Shirt camp in Bangkok during the crackdown.
“Initially, they didn’t say communists were bad, instead they said we were all Thai in love”

Such patriotic love disappeared, however, once soldiers got orders to shoot. Yon was instructed to shoot-to-kill anyone he came across on sight.

Yon Ngonsuk(57), Red Shirts supporter, had served for Volunteer Defense Corps (‘Kong Assa Rak Sa Dindaeng’ or ‘Or Saw’ in Thai), the biggest paramilitary forces established in 1954, for nearly 20 years decades ago. It was not his choice but he was forced to do after arrested by armed forces at his age of 18 in 1971, while helping communist guerrillas. (Photo by Yu K. Lee)

He was discharged from the unit in the early ’90s and returned to normal life.
“Even though I had been with military for 20 years, I really hate the army this time seeing what they’ve done against protesters who ask democracy. I want to fight. Whenever there’s suppression, we want to fight more” Yon said.

Ironically, Isaan which is the poorest region in Thailand has produced numerous conscripts, who are often those whose education was terminated under the grade 9 (before junior high school). Such a fault line raises the possibility of a family tragedy — with conscript soldiers set against poor protesters from the same region.

Pravit (58, name changed), the red shirts supporter from Kalasin, spent uneasy days and nights during the months-long protest in Bangkok, where he had participated. It was not his fear of repression that disturbed him, but the chance of a violent confrontation with his youngest son, 22-year-old Thongchai. His son, like many sons of impoverished North and North-East, has been on military service as a conscript since last November.

Pravit was constantly contacting his son, whose normal duty was securing Suvarnaphumi airport, to find out if his unit would be dispatched anywhere near the protest site. In the end, Pravit returned home from Bangkok on April 7, before the bloody crackdown, without any clue of upcoming crackdown. He had planned to return to Bangkok, but didn’t dare to after deadly clashes on April 10, in which his son took part.

“It was just terrible to face off with people who might be my friends, neighbors or relatives. We were told to disperse protesters but I never expected such deadly consequence”

Sitting next to his father, 22 year old son Thongchai, on leave from service, said. He rarely discussed about the bloody day with his father.

Thongchai (22, name changed) a conscript soldier, was dispatched in Bangkok to crackdown Red Shirts protesters on April 10. It was 3 days before his Red Shirts father left Bangkok without any clue of upcoming crackdown. Thongchai said he will join Red Shirts protest after being discharged from the army (Photo by Yu K. Lee)

“I will join Red Shirts protest, if there would be another round after I discharge from military service. My friend did so as a Red Shirts guard after leaving the army” said, what people might call these days, ‘water melon soldier’.

The revived Red Zone, Isaan is expected to be a center for what will happen next. Extreme anger, confusion, hope and despair are mingled among Red Shirts, who are discussing about what they would do for next. Wearing red shirts in Sunday market is one of the ideas. Not to sell anything to soldiers is another idea. Some people, such as Panee Tamma (51), a teacher in Khon Ken province, await election, but doubting about ‘fair and free election’ at the same time. Some observers cautiously predict armed
insurgency, while International Crisis Group which recommended the emergency decree to be lifted, once warned that civil war could break out, if political resolution would not be brought in.

“There would be a low-intensity undeclared civil war. This could happen as Red Shirts in the countryside rise up, following the crackdown on the Red Shirts at Ratchaprasong. Thaksin might even create a government in exile”

“There are many people here who would join underground movement or even armed insurgency if somebody would initiate…” said one Red Shirts supporter in Khon Ken province, who doesn’t want to be named.

Another supporter in Mukdahan, who wants not to be named as well, was pondering over when asked about armed insurgency and she said.

“I’m not sure if it could be similar to communist insurgency era. But yes, I can provide food and shelter for them”

No matter what type of movement appears, Red Shirts in provinces look forward to the next movers in continuing their struggle.